Dineobellator notohesperus is a velociraptorine dromaeosaurid known from the end of the Cretaceous in New Mexico. Its fossils were collected from the Naashoibito Member of the Ojo Alamo Formation in northwestern New Mexico, and these strata date to the Maastrichtian, approximately 70-67 million years old. Its generic name translates as 'Diné warrior' referring to the people of the Navajo Nation, and its specific name translates as 'the southwest'. The name is pronounced “dih NAY oh - BELL a tor” “Noh toh – hes per us.”

The material was more completely described originally as part of my doctoral dissertation. This was followed up with the full publication in Scientific Reports (Jasinski et al., 2020).

Dineobellator notohesperus was named in honor of the people of the Navajo Nation, who historically and currently live in the same regions the dromaeosaurid would have lived. It would have been around 2 to 3 meters long (~7 to 10 feet long) and probably weighed about 25 to 40 kg (~55 to 90 lbs). This makes Dineobellator a medium-sized dromaeosaurid, but one of the larger velociraptorines.

While we have come to find that many dinosaurs had feathers, the more direct evidence for this is often rarer. This is usually due to the conditions needed to preserve feathers are not found in all fossil localities, or even very many of them. For dromaeosaurids, it was discovered a little over a decade ago that, with at least some members, the outer edge of the ulna preserves quill knobs, features on the bones that show where secondary remiges would have contacted the bone. These provide a stronger attachment point for these feathers when the animal was alive. While this has been found for a few members, including Velociraptor, these features are still hard to find unless the ulna is preserved well. While the bone was broken and fragmented when collected, quill knobs (or ulnar papillae) are still visible on the ulna of Dineobellator. While we already would have inferred that this dinosaur had feathers, due to phylogenetic inference and close relatives having feathers, this offers more direct data on their presence. Indeed, we can get a reasonable estimate of 12-14 secondary feathers for Dineobellator, making it very similar to Velociraptor mongoliensis, which would have had 14 secondary feathers. 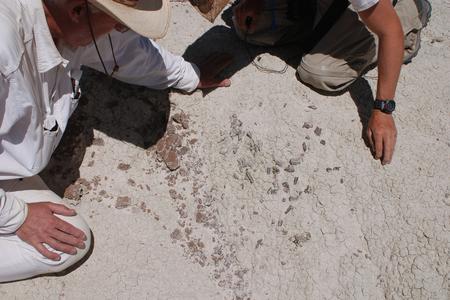 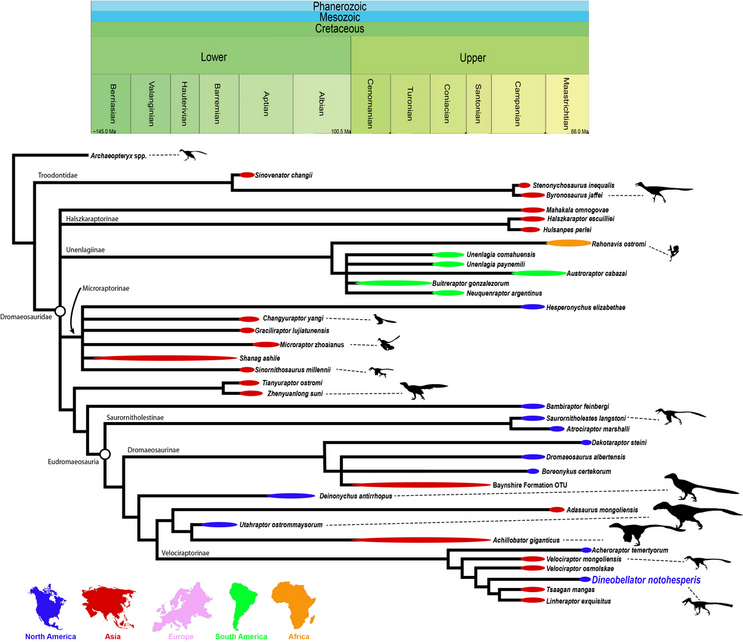 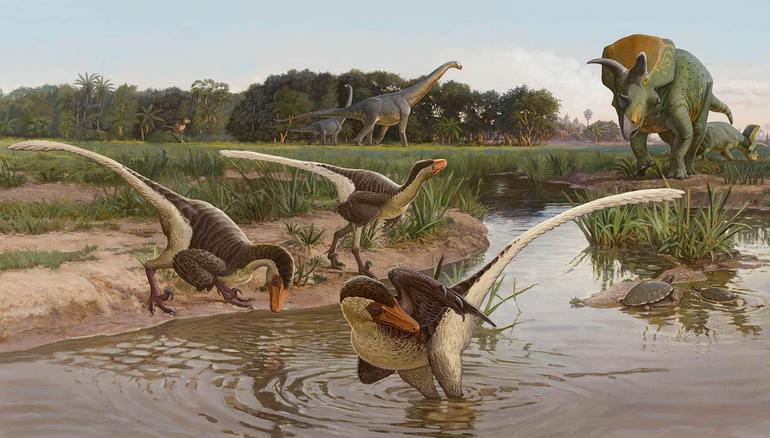 Here we have a reconstruction of a small pack of Dineobellator notohesperus at the water's edge within the ecosystem of the Alamo Wash local fauna (Naashoibito Member) as we currently understand it. In the water you see a few baenid turtles to the right. Also to the right you see the triceratopsin chasmosaurine ceratopsid Ojoceratops fowleri, a close relative of Triceratops and Eotriceratops. In the background you see a pair of the titanosaurian sauropod Alamosaurus sanjuanensis. They are being pursued by a tyrannosaurine tyrannosaurid. If you look especially closely you may notice a pair of ornithomimids and an Hypacrosaurus-like lambeosaurine hadrosaurid near the tree-line as well. This reconstruction was done by the incredibly skilled artist Sergey Krasovskiy. 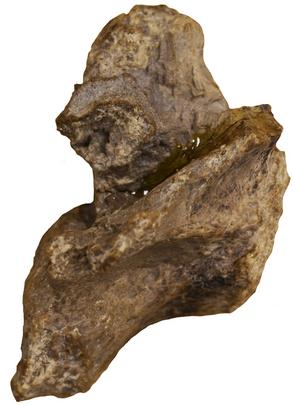 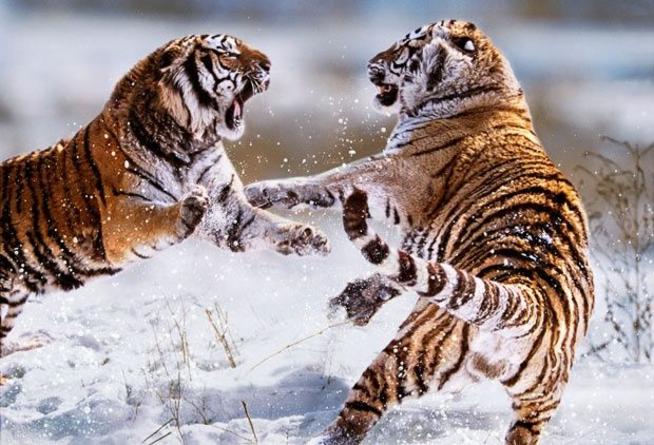 Other aspects of the fossils of Dineobellator notohesperus also hint at a potentially dynamic and hard life for the individual dinosaur itself. The hand claw has an abnormal gouge and depression on its medial surface. The feature is similar to, and reminiscent of, the shape of the end of the claws of an animal of similar size and morphology to Dineobellator itself. While we can currently only speculate as to what may have cuased this feature, it is certainly possible that it is the result of a fight between two Dineobellator. Two members of the species could have fought for numerous reasons, including a dispute over food or other resources, and it could have even been through the process of trying to reproduce with rivals quarreling over a mate, or even a female letting a male know she was not ready to try to reproduce. Regardless of the reasons, there is no evidence of bone regrowth or healing, so whatever caused this may have been at, or near, the time of death. Additionally, a pathology to a rib of this Dineobellator suggests a rib injury that was able to heal, although it may have led to pain and discomfort for the animal throughout the rest of its life.

As the specimen was fragmented, when it was first collected the only element we knew we had for sure was the claw (or ungual phalanx). Everything was brought back to the lab in Harrisburg, where we slowly cleaned up the material and worked to find fits between the fragments. Over time, as more contacts and fits were found, other bones and elements started to take shape more completely, including the humerus and ulna, among others. 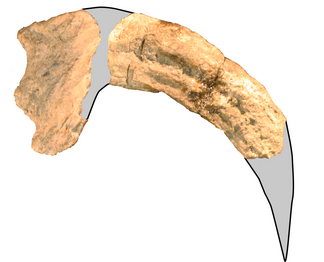 The fossil material was first mentioned in the literature in a paper in 2011 (Jasinski et al., 2011), as part of a manuscript on the fauna of the Naashoibito Member, known as the Alamo Wash local fauna. While it was mentioned, it was not described in great detail and was only identified as an indeterminate dromaeosaurid at that time. 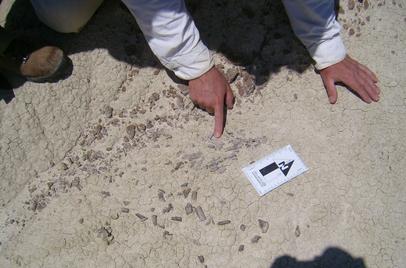 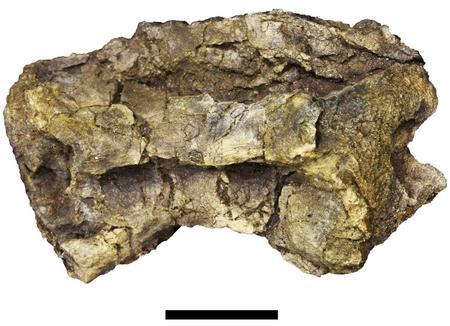 The holotype and only known specimen was first found and collected by Robert Sullivan, myself, and Jim Nikas in 2008 as part of the annual field program run by paleontologists at the State Museum of Pennsylvania. While the initial findings appeared to just be numerous small and gracile bone fragments eroding out of a small hillside, Dr. Sullivan noticed the nearly complete manus (or hand) claw among the fragments. 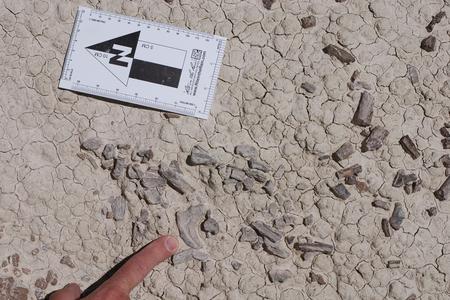 I eventually was able to get back out to the locality several years later, and collected more material that had been weathering out hillside. Additionally, I collected matrix from the locality and screen-washed it for smaller material and fragments. This led to more material including vertebral material.

It differs from other known dromaeosaurids in several features, including those of the manual and pedal unguals (hand and foot claws), humerus, and caudal vertebrae. A phylogenetic analysis investigating the evolutionary relationships of Dineobellator also recovers it as a velociraptorine dromaeosaurid. This suggests a close relationship between Dineobellator and Velociraptor. Dineobellator is not the only North American member of this clade, though, as Acheroraptor from the Hell Creek Formation was recovered as the basal-most member of this subfamily of raptor dinosaurs.

In addition to the unique features that help diagnose and differentiate Dinoebellator notohesperus from other dromaeosaurids, some of the features of the fossil bones are suggestive of its paleobiology and potential behaviors in life. The angle of the distal portion of the deltopectoral crest is unique among dromaeosaurids in having a distinct, acute angle rather than a gentler angle with the rest of the shaft of the humerus. The crest is longer, but not especially larger (length from the axis of the shaft), so is not suggestive of an especially larger muscle, especially for the m. brachialis, which originates on the distal edge of the deltopectoral crest, and aids in flexion of the forelimb. The change in the angle of this portion of the humerus would potentially change the orientation of the m. brachialis, creating a more parallel orientation for the muscle in relation to the long axis of the bones of the forelimb and resulted in lower muscle forces needed for the same resulting outputs for this flexion. A smaller muscle could have resulted in similar strength outputs, or a similar-sized muscle could have potentially resulted in stronger flexion of the forelimb, particularly the forearm. In order to more fully understand these implications, though, we would want to have more elements of the forelimb to gain a better understanding of a more complete myology of this portion of Dineobellator.

So, overall, we know that Dineobellator was a distinct dromaeosaurid living at the end of the Age of Dinosaurs in the southwestern United States. A phylogenetic analysis recovers it as a close relative to Velociraptor. Some of its features hint at potential behavioural charactertics, along with a potentially hard natural history and lifestyle. In order to be more certain of these latter characteristics, including its paleobiology, we need to not only try to find more of this specimen (which we will continue to look for), but also try to find other fossils of it. Finding more material will give us a better idea of its overall anatomy, while finding more individuals will also help us learn about variation, and we may find more distinct features of Dineobellator, or determine that some features are too variable to be useful in diagnosing it. Regardless, we will continue to try to learn more about this intriguing predatory dinosaur through more analyses and, hopefully, more fossils. Stay tuned!

The caudal (or tail) vertebrae of Dineobellator are also potentially important for understanding how this dinosaur may have lived and behaved. Most dromaeosaurids have stiff tails, and in that regard Dineobellator appears to be no different. The key difference lies at the base of the tail, near the dinosaur's hips. While in other dromaeosaurids the proximal caudal vertebrae are acoelous or amphiplatyan, which continues the stiff, straightened nature of the tails of these dinosaurs, the proximal caudal vertebrae of Dineobellator notohesperus are opisthocoelous, meaning the anterior centrum is concave while the posterior centrum is convex. This potentially allows the base of the tail to be mobile while the rest of the tail (distally) is stiff. This kind of morphology can allow the tail to be used as a rudder or counterweight, and would aid in quick and concise changes in direction. While it may not change much in their top speeds, we can see a potential increase in agility with Dineobellator. This may have made Dineobellator especially good at pursuit in open habitats, with a potential modern analogue or similar predatory style utilized by cheetahs. It is not too difficult to super-impose Dineobellator into the place of cheetahs and imagine them pursuing prey in the open habitats at the end of the Cretaceous in New Mexico. 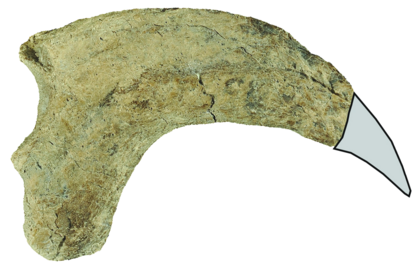 In addition to the potential myological implications of the morphology of the humerus, features in the claws also have potential implications. The dorsomedial groove on the hand claw implies larger digital extensors (m. extensor digitorum brevis), which could allow for the hands to me opened more quickly. Counter-acting this action are especially larger flexor tubercles on the hand claw, suggesting stronger and faster closure of the manus and potentially tighter grip strength in the hands relative to other raptor dinosaurs. Similarly, the pedal ungual, or foot claw, also shows enlarged flexor tubercles, suggesting stronger flexion of the toes. While more material is needed to say more definitively what these means for Dineobellator, it suggests a dromaeosaurid with strong forearms, hands, and feet, and could have greatly aided in it being a dangerous and proficient predator.